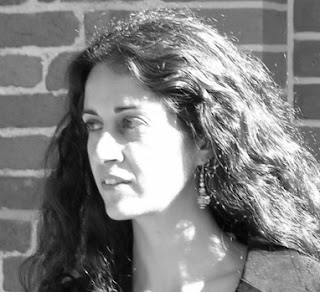 Hi dear Debbie, thank you for hosting me today to talk about my urban romance fantasy series Boreal and John Grey.

It always starts with elves... Their pointy ears, in fact. At least for me. ;)

Tolkien described them as “leaf-shaped” and in their many incarnations in books and films, the elves acquired ears that range from slightly pointed and small to huge, sharply pointed ears that rise over their heads.

As far as I know, Tolkien wasn’t much interested in the origins of those ears. In fact, he may not have meant his elves to have pointy ears at all, as “leaf shaped” may mean many things. But it was interpreted as pointy – because the Victorian fairies and the folk creatures like pixies, were described as having pointy ears.

Why would they, though? What’s up with the pointy ears?

I think an explanation can be found in other mythologies and folk stories. Let’s move to Greece, for instance (not entirely by chance, since I’m Greek myself) and examined the neraides, the elves or fairies inhabiting streams and forests and high mountains. These are tall and beautiful, often with long golden hair – and with goat hooves and animal ears (sometimes even donkey ears!) Or let’s look at the legend in Japan, where the fox spirits (kitsune) have fox tails and ears.

Pointy ears were probably animal ears originally, the mixture of animal and human an indication of the elves’ divine nature (like the Egyptian god Anubis, for instance, with his jackal head).

One could wonder, at this point, if elves actually had tails...

But I digress. Back to the pointy ears! :D

I blame the ears for my fascination with the elves, although their wicked ways  (bringing illness, exchanging healthy children for sickly changelings) also intrigued me. They were said to interbreed with humans, accepted sacrifices, healed wounds, but also caused nightmares.

They were obviously not all kindly and cuddly. These elves were akin to gods. They had great magic and didn’t always use it for good. They sort of disappeared after the Middle Ages, and nobody knows where they went.

It doesn’t matter. Because now they are back – pointy ears, wicked ways and all. With technology, magic, power. Bent on conquering humankind.

Ella Benson, Paranormal Bureau agent, fights all that comes through the Veil – dangerous Shades crossing into our world. But increasingly dangerous creatures are slipping into her city, her work partner has just gone missing, and a mysterious – and, frankly, quite hot — guy saves her life. His name is Finn and, as it turns out, he’s a natural when it comes to fighting the Shades.

When after centuries of peace the Gates between the worlds start opening and our old enemies, the elves, make a comeback, Ella needs a new, temporary partner. Enlisting the mysterious Finn is a no-brainer, until she realizes he is guarding dangerous secrets of his own.

Together with Finn, and the fate of the world on her shoulders, what’s Ella to do but grab her weapons and figure it all out, one way or another. 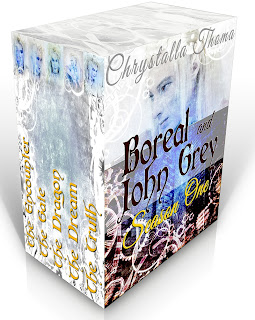 Read the complete First Season of the series Boreal and John Grey, books 1-5 (The Encounter, The Gate, The Dragon, The Dream and The Truth) at a special price with an Author’s Note at the end. This is urban fantasy verging on paranormal romance. A sexy love story set against a backdrop of dragons, trolls and magical portals, fast-paced action scenes and suspense.

Finn’s attention had strayed to a counter covered in blades of all shapes and sizes. He reverently touched a katana. Then he lifted a throwing knife. He twirled it between his slender fingers and Ella wondered if he’d cut himself to shreds. But he didn’t.

Her new partner. She shook her head in disbelief. How had things changed so fast?

“Grab two of those,” Jeff told Finn who jerked back and almost dropped the knife. Jesus, talk about jumpy. “And throwing stars. Shuriken. Good for catching the Shades from a distance. Pure iron, special delivery, came in today.”

Finn hesitated, glanced from Jeff to Ella, then ran his hands over the knives and stars. His eyes fluttered closed, as if he were playing a musical instrument, fingers moving lightly over the shiny blades. Ella held her breath.

That snapped Finn out of his trance. With a little sniff, as if to say he’d be the judge of that, he proceeded to pick up various knives and test their balance and grip, spinning and thrusting them through the air. So graceful. It reminded her of the first time she’d seen him fighting Shades, moving like a dancer through the night.

When Finn selected two knives and prepared to pass them through his belt, she turned to Jeff. “Sheaths?”

“Sheaths, yeah.” Jeff, who’d been staring at Finn, blinked and pulled out several from a drawer. He threw them at Finn who snatched them out of the air without missing a beat.

Finn lifted his shirt and took off his belt to attach the sheaths, and Ella had to drag her gaze away from his perfect abs. She resisted the urge to fan herself. Whoa, baby. How hadn’t she noticed the night before?

Oh, right. Finn, passed out in her car and then her couch, covered in blood. His abs hadn’t really been the first thing on her mind.

“That looks like a nasty wound.” Jeff nodded at the stained bandage on Finn’s side, and she made a mental note to check that too, later. Soon she’d need an organizer for all those mental lists.

Finn buckled the belt and sheathed his knives. He looked up and grinned. His smile was startlingly beautiful and she found herself gaping — again. God, get a hold on yourself, girl.

“Like a porcupine,” she muttered, her own lips lifting in a matching smile. It was nice to see Finn happy — or at least pleased with his weapons. “What about guns?”

“Here, Finn.” Jeff lifted a Heckler and Koch USP CT pistol for inspection, a calculating gleam in his eye. What was he going for? “Semi-automatic, lightweight and accurate. Give it a try.”

A concentrated look on his face, Finn stepped forward to receive it. She opened her mouth to ask if he knew how to use it, but she needn’t have worried. He checked the magazine, and when Jeff threw him a shoulder holster, he pulled it on, tugging on the black leather straps as if he’d been doing it all his life.

Jesus. Who was he anyway?

The straps pulled on the neckline of his t-shirt, exposing a swath of muscled chest and his left shoulder. Before he adjusted it, a mark drew her eye, sort of like a starburst. A birth-mark?

“Have you used one of these before?” Jeff beamed at Finn, obviously considering him a kindred spirit.

“Similar one,” Finn grunted. He sheathed the pistol in one of the two holsters hanging over his ribs and folded his arms. Armed to the teeth, legs spread, head bowed, he looked ready to take on a whole army of Shades.

Jeff winked at Ella. “Well, well, Elly. Where did you find him? Ex military, is he?”

That was a thought. Might also explain why Finn was so mum about his identity and past. “Thanks, Jefferson. Now we can go to the lab. Finn?”


Finn lifted his head, his gaze unfocused. “At your command,” he whispered, shoulders tensing, back straightening, and the funny thing was he didn’t seem to be pulling her leg at all.

About the author
Greek Cypriot with a penchant for dark myths, good food, and a tendency to settle down anywhere but at home, Chrystalla likes to write about fantastical creatures, crazy adventures, and family bonds. She lives in Cyprus with her husband and her vast herds of books. She writes mainly fantasy and science fiction. Her dystopian YA science fiction series Elei’s Chronicles (Rex Rising, Rex Cresting, Rex Equilibrium) is available on Kindle and in print. Shorter stories set in that world are also available, and a Companion to the series is also in the plans.

Quickie update as I haven't posted for a while. I don't know whether anybody actually reads these posts, but last month's stats shot up to over 2,500 views, which is something of a record for me as I generally get about 1,000 hits a month. I'm not that interesting...

So the new book will be called Calling the Tune and will complete (oh, yes it will) Michael's story. It will hopefully tie up a few loose ends, introduce at least one new character and provide a resolution to events that have happened. There'll be a blog post over at Authors Electric on 6th July (my monthly day to post) which will talk about book titles and how they work for me.

Just over halfway through writing. I have a couple of beta readers, I hope (haven't asked one of them yet) and with any luck it will be out in e-book and paperback before the end of the year, depending on how long edits take. I've also just approached my designer about a cover.

I may even post a few more extracts. Watch this space ... 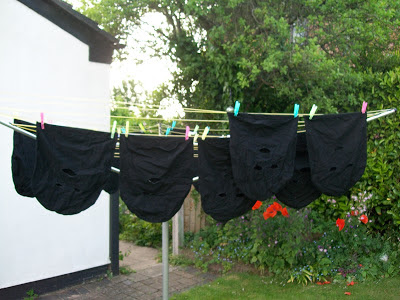 Meanwhile, my garden looks like something from a terrorist training camp. Where else would you see an array of black hoods on a washing line? It's that time of year again -