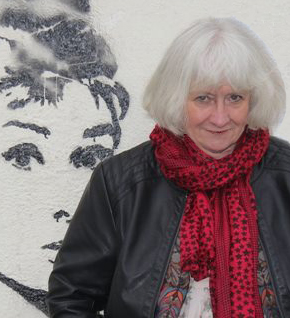 Writer Jan Edwards launches Winter Downs, the first book in the Bunch Courtney Investigates series. I tracked down Jan in her writing cave in the wilds of the West Midlands and persuaded her to answer some really, really important questions:

Where would you hide the bodies?

Under someone else’s patio? In a volcano? Dissolve it in acid? This is a tricky question!

I guess the best way would be to destroy it as comprehensively as possible and dispose of the rest as far away as possible from the murder site – preferably in a different country.

To be more serious, modern forensics make things pretty tough if the body is found. The tiniest spot of bodily fluid or matter is potentially identifiable and CCTV and tracking on smartphones makes it hard to go anywhere unnoticed.

Winter Downs does not have those problems to the same extent. Reliable scientific/lab work in the 1940s, beyond fingerprinting and detection of poisons etc, was basic. In a time when few people had telephones, let alone tablets and smartphones, the emphasis was always weighted toward eye witnesses.

Crime: Poirot or Girl on a Train?

There are only so many new stories and you can argue that every story has been done before. And yes, I do see that attraction of Girl on a Train. It’s a good read, but for me there were so many tropes shared with Rear Window, and or course Agatha Christie’s 4.40 From Paddington, that it didn’t feel it was fresh enough to become a firm favourite with me. So it’s Poirot every time. The classic whodunnit is always tough to beat.


Do you have music playing when you write and if so what are your tracks of choice?

Not always but yes, I do often have something in the background. Usually something instrumental, or instrument heavy, otherwise I get caught up in the lyrics and lose track of what I am writing. Driving rock for the action pieces or psychedelia or folky based music for the more cerebral or quieter parts. I did get some 1940s CDs for Winter Downs to immerse myself in the period

I have a fairly eclectic taste in music generally, so choosing a few tracks would always be hard. But if I am following on from Q2 then I have a selection of albums – yes, I am that old fashioned – that I play when writing because they are often instrumental or are so familiar that I don’t need to listen to the lyrics. Muse (good driving rock for writing action); Rick Wakeman’s Journey to the Centre of the Earth – for the same reasons as Muse; Liquid Sound Company - psychedelic rock that allows me to drift  Garden; Tea Party; Kirsty McColl, Steeleye Span; Fairport Convention; Jethro Tull; Robert Plant; Shooglenifty... there are many more.  I don’t much like crooners or the pseudo soul that passes for R&B these days which means pretty much anything that might win X Factor is out for me :-) That and boy bands!

Pride and Prejudice on every level that counts. I need say no more.

What one genre/plot cliché would you get rid of?

Genre: Zombies, if they can be seen as a genre? Because a/ real zombies are not re-animated corpses and b/ zombies that eat brains are rather limited in scope.

Cliche: ‘damaged’ cops (especially on TV). It’s come to a point where every cop is not just a maverick but a borderline basket case. They’d be on permanent sick leave in the real world!

Is there one subject you would never write about as an author?

But genres are not the same as subjects; of which few are totally off limits. Taboos can be dealt with if you approach them in the right way and do enough research so that what you saying is both correct and credible. There are a few subjects I would probably shy away from purely on the grounds that I don’t feel qualified to write about them with any authority

What was the first (*genre ) story you read and what kind of impact did it make on you?

That is almost impossible to answer. Taken at face value Noddy, whose best friend is a gnome would count as fantasy...

Looking at more adult fiction? Back in the late 60s fiction tended to leap from children’s to adult with little YA or Teen fiction in between so I read a lot of the westerns bought by my (elder) brothers, discovering Michael Moorcock’s Count Brass and Corum books, which sent me down the fantasy route. They were so very different from anything else I had ever read. The specific genre they came under at the time was Science Fantasy, which is not a term you hear any more.

Other books that made an impact at the time were Tolkien’s LOTR and Carrol’s Alice, which are both technically fantasy, though Alice would probably be called Urban Fantasy had it been written now as the contemporary fiction it was in 1865.  These books were all required reading for the budding hippy circa 1968!

That said I also read huge amounts of classic crime and devoured all the usual suspects; Poirot, Wimsey, Marple and the rest of the band. But I have also read a lot of 19thc and early 20thC fiction. Austen’s Pride and Prejudice being a firm favourite, as is Du Maurier’s Rebecca, all of which has put me in good stead for writing Winter Downs, set in 1940! 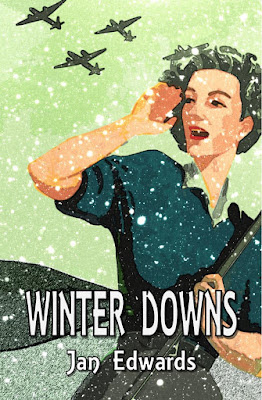 Thanks, Jan! So what's Winter Downs all about, then?

In January of 1940 a small rural community on the Sussex Downs, already preparing for invasion from across the Channel, finds itself deep in the grip of a snowy landscape, with an ice-cold killer on the loose.

Bunch Courtney stumbles upon the body of Jonathan Frampton in a woodland clearing. Is this a case of suicide, or is it murder? Bunch is determined to discover the truth but can she persuade the dour Chief Inspector Wright to take her seriously?

Winter Downs is published on 3rd June 2017, by Penkhull Press in paperback and ebook format.