I've decided to feature some other indie authors on my blog. First up is Marita Hansen whose novel Behind the Hood is now available on Amazon kindle & Smashwords. Marita is also a talented artist - the cover art is her own work. 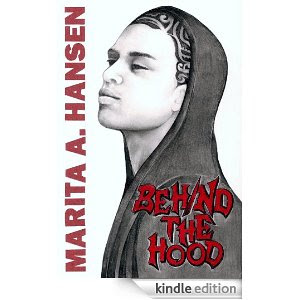 Life on the rough side of New Zealand.

In this South Auckland neighbourhood where gang culture, drink, drugs, sex and violence is already a way of life; a vicious attack on a teenage girl sparks a ripple effect of revenge and fury. Live the carnage through multiple viewpoints as the tale unfolds to a bloody climax.

Warning: NOT for the fainthearted.  *This book contains strong scenes and adult material.
Here's the start of the book to whet your appetite:

Maia
Maia Daniels knew she should just ignore the boys. Walk past, don’t listen, she told herself. Don’t talk back.

It was ten o’clock on a Saturday night. The gang were sitting on a wall outside Claydon Pub, passing around a smoke. She’d seen some of them at high school, when they decided to turn up that is.

Whooping and yelling came from the pub. A television blared loudly, no doubt replaying the All Blacks’ rugby match against the Wallabies. Maia stopped at the driveway as a purple Holden drove into the car park. Music blasted from inside the souped-up machine, the bass pumping its steady beat out into the night.

The gang leader was eighteen, tall and solidly built, with a wide, flat nose. He’d shaved off his hair recently, replacing it with a curved pattern called a moko. Usually, the tattoo adorned the face, a sign of a Maori warrior—something to be proud of. But Tama was no one to be proud of, nothing but a dreg who constantly harassed her. Unlike the other boys, he wore his hoodie tied around his waist, his ripped jeans and muscle shirt unsuitable for the cold autumn weather. Maia figured he was probably high on something, either from the weed in his hand or the empty bottles at his feet—or both.

“Hey, Maia! Are ya a double d?” a podgy boy with spiky blond hair shouted.

“They sure felt like it,” Tama replied, his hand actions eliciting laughter from the gang.

A blush ran across Maia’s cheeks. Shit, she hated her breasts. Even in her oversized sweatshirt they still grabbed attention. She pulled her hood further over her head, and rounded her shoulders. After another car passed, she hitched up her track pants and walked across the muddy driveway.

She looked back, aching to give him the finger, but instead jammed her hands into her pockets. God, she was a moron for sneaking out, but ... Ben’s raves were always awesome. Why couldn’t her mum let her go? It wasn’t like she did drugs, and the boys at the party were just mates.

Tama’s scowl changed into a grin. He threw his joint onto the ground and jumped off the stone wall. With a jerk of his head, he indicated for the gang to follow.

Maia’s heartbeat picked up. Still concentrating on Tama, she stepped off the kerb and onto Waiata Crescent. The blast of a horn made her leap back. The front passenger leaned out of a battered sedan, and swore at her. Ignoring the pimply git, she scooted around the car and across the side road.

A loud wolf-whistle made her jump. She glanced over her shoulder. Tama’s eyes were fixated on her, promising things she didn’t want.

He grabbed his crotch. “I like ya from behind, Maia.”

All the boys, except for Mikey Thomas, laughed. Tama’s cousin looked away as though uncomfortable with what was happening. He was fourteen and in her class at school. She thought he liked her; either that or he had a staring problem. Yeah, she’d only noticed because she was usually checking him out too.

Maia wondered if she could lose the gang by cutting across the highway. Traffic was heavy, making this option just as dangerous as stopping for Tama. Further up the road, past the tyre yard, the video and liquor stores’ lights were on. The neon sign of the happy video man was a welcoming sight. It was maybe a hundred metres away. She thought she had a chance of outrunning Tama. She was fast, damned fast. If she’d showed up to school enough, she probably would’ve been on the track team.

Maia wasn’t sure whether it was a knife—or something else in his pants. She knew he carried a switchblade. He’d stabbed her brother in the arm once when Nike attacked him with a baseball bat. She’d always wondered whether this was why Tama harassed her. But she couldn’t blame Nike for it. Leila, his girlfriend at the time, had caused the fight. The bitch had cheated on him with Tama, then cried rape after he found out.

“Leave me alone, Tama,” she said, remembering the last time he’d approached her. She’d kicked him in the balls for grabbing her breasts. “Nike said he’d beat the living snot outta you if you came near me again.”

Maia knew she should keep her mouth shut; that whenever she spoke it got her into trouble. Her mother had told her countless times, “You speak too much, Maia, you should listen more.”

She grinned, unable to help herself. “What do I owe you? More bruised balls?”

She heard a slicing noise behind her, the sound of a switchblade being opened. Shit!

You can find Behind the Hood at the following distributors
Amazon US
Amazon UK
Amazon DE
Smashwords
Reviews
"INTENSE! I could probably leave my review at this one word and that would say it all. What a nerve wracking read. At first I thought there were going to be too many point of view characters for me to get involved emotionally, but they all tied back to each other perfectly. I had no problem keeping track of who was who and how they related back to each of the other characters. By the last three-quarters of the book I had the phones turned off and the Do Not Disturb sign hung on the door. I had to know what was going to happen and I didn't want any interruptions. Marita Hansen did not disappoint. I can't wait to read the sequel..." Amazon US Review.
"This may be a work of fiction, but the author has used her knowledge to give us an eye-opening and realistic look into a very rough culture. This book is quality, one not to be missed." Smashwords Review.


About the Author
Marita is a New Zealander, currently living in Singapore.  She is married with two kids, and likes to write, create artworks, coach soccer, and occasionally referee a match.

Email ThisBlogThis!Share to TwitterShare to FacebookShare to Pinterest
Labels: other authors, writing