You Couldn't Make It Up

It's 3.30pm and I'm finishing the design of a very complex universe at work - yes, really, I am. Not something from Magrathea, no, but that's what I do as a day job: design universes. Actually I work in business intelligence and the software I use to set up systems to interrogate big databases is called Business Objects - the resultant interface is called a "universe".

So it's half-three and the phone rings. It's my husband who I left at home in bed with man-flu this morning. He's been up and about and says that one of my catfish is stuck in the aquarium. Now this morning I remember seeing a bit of plastic pipe floating on the surface of the water - I pushed it back down to the bottom, weighted it with some gravel and realised the catfish was still in it. I thought he was probably a bit scared and he'd come out when I'd gone. 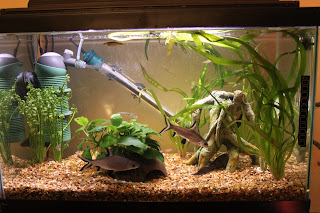 Now my catties came to me about two inches long and they are both about five inches now, if not bigger. They're big and clumsy, but very sweet nervous creatures who like to live in the pipe and the coconut shell. Unfortunately one had grown a bit big, tried to bend in the T-junction of the plastic pipe and got himself completely wedged in tight. Poor thing had been stuck there all day.

Husband insists this is a domestic emergency and I need to come home to rescue him (the fish or husband? I'm not sure). Fortunately, I only live 15 minutes from work, so after much hilarity in the office, I drive home. And the pipe is floating with poor cattie tightly stuck in the bend. I try to shake him out but he gets more agitated and more stuck. Husband says we'll have to saw the pipe apart, so I find a washing up bowl and prepare to transfer tank water, fish and pipe.

Then I have a brain wave. I find a tube of face cream with a lid diameter slightly smaller than the pipe. Insert it gently into T-junction and push very slowly. Visions of squashed fish, but I persevere - and he moves a bit. Take out tube and look inside and he's definitely straightening out. Bit more pressure and a shake to dislodge his fins and he's out, straight to the bottom of the tank. 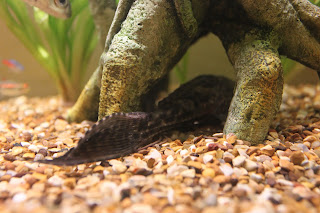 The pipe is in the bin, but I now have a traumatised fish with a scratch along one side. He hasn't moved in a few hours but he's still breathing. If he hasn't moved by tomorrow, it's off the to the aquarium shop to see if I can get something to put in the tank to make him feel better. He probably needs a stiff drink - I know I did!

I told you - you couldn't make it up.

Email ThisBlogThis!Share to TwitterShare to FacebookShare to Pinterest
Labels: fish