Jumping On the Bandwagon


What do you type into google when you’re looking for something? The whole thing, or just what you consider to be the key words of whatever it is you’re searching for?

Take Twilight. Yes, I’ve read it and if I’m completely honest, I did rather enjoy it. That’s my guilty secret for the day. I even wrote a blog about it a while back. So if you were looking for all things Twilight online (films, books, T shirts, fake tan, anti-sparkle powder, vegetarian meals for vampires, central heating for werewolves made easy  – I’ll stop now, shall I?), you’d probably just type Twilight into a search engine, wouldn’t you? Or Hunger Games or whatever you’re into.

How about Fifty Shades of Twilight? Lots of – well, you’ll have to go see for yourself. Or Twilight 2 New Moon parody (What if Edward Hooked Up With Jacob...?) which kind of speaks for itself.

Or maybe Fifty Shades Of Sparkling Vampires With Dragon Tattoos That Play Starvation Games, which defines itself as “a short parody of a spoof wrapped in a wet blanket of irreverence”. I’m not entirely sure how typing Twilight into amazon’s search engine produces that one, but there you go. 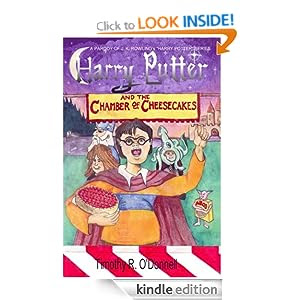 Clearly there’s a market for something that instantly captures the zeitgeist and provides alternative viewpoints or satirises the original. Sometimes I wonder how close to the line these authors walk – there are dozens of of Potter parodies and spoofs: Harry Putter and the Chamber of Cheesecakes anyone? And yet JK Rowling’s lawyers are quick to jump onto anything illegal concerning the HP brand, so parodies are presumably perfectly OK, if somewhat dubious in taste at times. To be fair, the blurb for Cheesecakes suggests an innocent romp through Potter-land and it all looks completely tasteful and rather a good read.

If Fifty Shades of Grey began life as Twilight fan fiction, then maybe trying to be original isn’t the way to sell lots of books. Clearly the more raunchy you can make your parody, the more books you are going to sell, which makes me wonder if erotica really is the next Big Thing.

Maybe that’s where I'm going wrong. I should be exploring Katniss’ sex life instead, or working out what kind of creature a vampire-and-werewolf liaison would produce.

Just my two cents... I don't think parody is a bad thing but it shouldn't rise to a classic level, original works do. But some of them are quite funny.

As for writing an erotica novel about Katness' sex life, I'd personally steer clear of that train wreck. How that book sold as well as it did is beyond me, the character creation was weak and the woman was a classic example of what makes it hard for women in the world. And the prose.... Oh My don't get me started....

Erotica has been around for a while now and has just became main stream but I don't know that it will have the huge draw power that other types of romance novels have.

I could never actually write one myself, no matter how much money it'd make. I think I'd find it too hard to conform to somebody else's definition of a character and if you deviated too far, it'd lose what can make a parody clever.

I confess I rather liked Hunger Games (guilty secret number two). Plotting wasn't particularly strong and while the games themselves weren't that original, there were some quirky elements that pulled it together for me. Book two was a bit weaker and book three a waste of time, but there you go. I'm sure the teenagers love them, although my 16 year old hasn't yet been interested (nor Twilight either, sensible girl, though she's reading Scott Westerfeld right now)