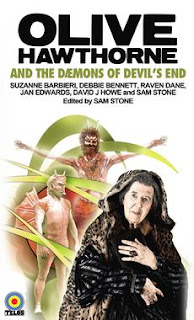 It's all happening this Autumn. November will finally see the launch of the White Witch project that I've been involved with for so long. This is a DVD in which Olive Hawthorn, the White Witch of the title, recounts her life since the days of the Daemons and her encounter with the mysterious man known as The Doctor. Olive is played by Damaris Hayman, the original actress who appeared in the 1971 tv adventure The Daemons and the episodes were written by myself and other writers.

In addition to the DVD, there will be a book - a novelisation of the film scripts, which is published by Telos Publishing. This expands on the stories on the DVD and is proving to be a collector's item already, judging by the number that have already sold on pre-order via the Telos website. 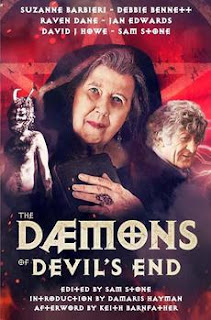 And we are going on tour! The DVD and book launch at Forbidden Planet in London on November 10th - click the link for more details. On 11th November, we'll be at Galaxy Four in Sheffield and on Sunday 12th, we hope to be at Waterstones in the Arndale Centre, Manchester. Damaris herself will be at some of the events, as will the film's producer and director Keith Barnfather and some/all of the other writers and editors.

So if you're around those venues in November, pop in and pick yourself up a signed DVD and/or book. Or say hello. Or both!

I'm thrilled to be involved in something with a Dr Who link. It's such an iconic series with legions of fans of all ages around the world. Even people who don't watch it now, or have never watched it at all, have at least heard of it. It's amazing to be a part of it.