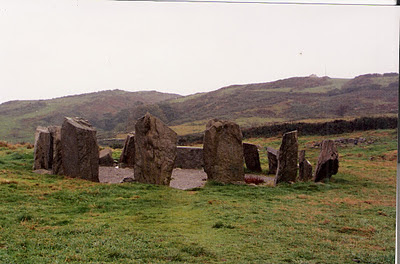 Do you believe in magic? I've always liked to think there is something else out there - other worlds, other dimensions. Things that if we knew about them, they'd explain all the odd happening, inexplicable events, strange co-incidences. The stuff we read about in Fortean Times. I mean there's got to be more, hasn't there? I remember reading books like Alan Garner's Elidor as a child and wondering if it was true. Anything other-wordly, that hinted there might be another layer to this world - and I'm hooked.

But real magic? The illusionists on tv look so convincing until you see the how-do-they-do-it shows, which make it all look so obvious and you wonder how you ever fell for it. And yet we want to believe it all, don't we? It's that sense of wonder you have as a child when the tooth fairy leaves a coin under your pillow, that acceptance of everything without trying to pigeonhole it into adult reality and common-sense. Are we trying to recapture our childhoods or is a genuine belief that there are other worlds, if only we could get to them.

I was reading a post on another blog earlier and it made me recall an incident from nearly 17 years ago. Andy & I had moved up to Cheshire from Surrey with his job. We'd been married 5 years and had wanted children but after 4 miscarriages and a lot of tests, we'd more-or-less decided not to waste our lives and money on something that clearly wasn't meant to be. So we bought a cottage that needed some serious renovation work and got stuck in.

The house was a mess - ceilings down, no plumbing and we were living in two rooms. Then I sat in the front garden in late August looking at the spectacular view across Cheshire towards Peckforton Hills (one of the reasons we bought the house) and saw a complete fairy ring in the grass. So I stood in it and wished. Just because.

I was pregnant within a month.

Maybe it was co-incidence. Maybe it was because we'd stopped trying and worrying and were concentrating on other things. Maybe it would have happened anyway. Or maybe there was a little bit of magic around that night.

But the fairy ring never came back.